Light the World With Your Light Body! 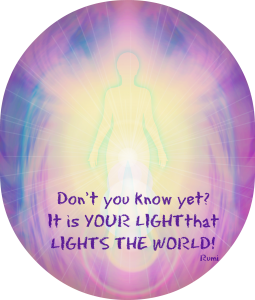 The highest level of conscious existence we can attain as a human is to activate our Light Body. This Light Body is an actual vehicle of transportation that transports us through the higher dimensions. It is an immortal body and the only alternative to death. In fact, it is the conquest of death.

It is called Merkaba – both Egyptian and Hebrew, it means:

The chariot of the soul – it must be activated to achieve ascension.

This Light Body connects your physical, emotional, mental and spiritual beings. It is empowered to transcend space, time and dimensions, radiates light and links your multidimensional self with the infinite Universe.

There is no big mystery to this Light Body. It is the gift we receive when our desire to know ourselves (God) speaks louder and clearer than any other voice. When we love God with all our heart, mind, soul and strength, we activate our Light Body naturally and we ascend into higher dimensions of conscious reality.

This body is composed of an ethereal form of energy and is the final stage of evolution. It is the most exalted state a human can achieve as it manifests the Mystical Body of Christ – the perfect man. It is our vehicle for Ascension – the merging of our physical and spiritual bodies into a perfect being of Light.

First off, there is no short-cut. We all travel different roads, but they lead to the same destination eventually…the creation of our Light Body, our conscious awareness and ONENESS with God and Ascension into Heaven. This heaven is not off somewhere hidden in the skies above. It is a level of consciousness we rise to, a reality that becomes ours. A resonating frequency.

There is only one thing that fuels the creation of the Merkaba…and that fuel is LOVE.

Love truly is the energy that makes the world go round and the only energy empowered to lift our frequency into LIGHT status.

All of us are evolving and that means we are absorbing more Light. This process happens over time – we don’t transform from matter into pure Light overnight. If we did, it would be like getting hit by lightning, we would experience electrical burn-out.

The reality is, we are LIGHT BEINGS and always have been. We were radiantly beautiful beings when we first arrived on earth sporting a brilliant body of Light. However, as we continued to evolve into physicality our vibration slowed and a garment of flesh (the slowest, densest vibration) was created that now covers this crystalline Light Body. It is this dense physical body that is being raised to Light Body status. We are changing at a cellular level from a carbon based third density body to crystalline-based body that can not only survive, but thrive in higher frequencies. We are consciously becoming the LIGHT BODY that we have always been!

So, you may ask, why did we descend only to ascend again? Have you ever seen a tossed ball stop half way on it’s journey down only to reverse in mid-stream and start back up? That would go against all the laws of physics. Apply this to our descent into a physical form. Hitting “bottom” – our densest form gave us the momentum, the energy, the rocket fuel so to speak, that empowers our journey back home.

All of this happens for one reason only…to become CONSCIOUSLY AWARE OF THE CRYSTAL LIGHT, of the CHRIST BEING THAT WE ARE so that we express and live this consciousness here on earth! So that we create heaven on earth as a divine human – one that is consciously aware of it’s connection to Source. That can only happen once we have developed/evolved a brain-mind that finally after eons of searching outside itself, reflects back on itself to discover itself as God! It is SELF-AWARENESS!

Think of it this way…

When you garden, you learn a great deal about how nature works. Through trial and error, you eventually figure out what produces the finest and most perfect expression of what it is that you planted. This information is then valuable for the next garden you plant. It will be easier, better and more beautiful than ever with the knowledge you’ve gained.

The Universe works the same way. It is a huge garden. Everything that gets planted has growing lessons attached. These lessons are not deleted, they are assumed by Source so that it can go forth and create bigger, better worlds!

And, guess what? You…yes, you and I, once at the level of Light Being, are the creators of these bigger and better worlds! Yes, it is us that creates these new worlds through the Crystalline Consciousness that we now express!

Or as my favorite author Annalee Skarin so perfectly expressed in her book “Beyond Mortal Boundaries,” the last chapter in the book – The Seal.

“Eye hath not seen, nor ear heard, neither hath it entered into the heart of man the things which God hath prepared for those who love him.” (Isa. 64:4 and I Cor. 2:9).

Just a small glimpse of these great and mighty things, which have been hid up from the foundations of the world, “am I now about to open unto the understandings of those who LOVE me.

Behold, I am Jesus Christ, Son of the Living God, and there is none other Name given under heaven whereby man can be saved.” (Acts 4:12).

I hereby place my seal upon this work that you may know it is of me — and none other. And according to your understandings and your love and your power to believe will these things be comprehended by you. “For the natural man receiveth not the things of the Spirit of God: for they are foolish unto him: neither can he know them, because they are spiritually discerned.” (I Cor. 2:14).

In this record is given the meaning of the name “ELOHIM” or the ancient Hebrew name of God. It is a masculine plural of a feminine noun, meaning God and His Mate — for “We shall make man in our own image, MALE AND FEMALE.” To whom was he speaking? It had to be Someone of female form else where would be the pattern? This very Name Elohim enfolds the full potential of man’s divine destiny as he OVERCOMES — and “evolves from the man kingdom into the God Kingdom.”

This earth is the “School for Gods!” And “AS man is, God once was and, as God is, man may become!” Not all will attain unto this glorious fulfillment because of the greeds and hatreds and evils and wickedness they have generated within their own beings. And the greatest wickedness of all is UNBELIEF! Within this word, “unbelief,” are all the evils of men generated.

As you, my holy, advancing ones, filled with love and a belief in the PROMISES, evolve, you will eventually be called upon to use the powers of your own perfection in the process of creation. You too will give forth that all-powerful command: “LET THERE BE LIGHT!” Else why would this information be imparted unto you right from the beginning of man’s sojourn on earth?

And from the LIGHT, which you have learned to generate in your own beings, as you have progressed in your schooling of preparation, will the atoms be formed to create worlds — and all that they contain: “FOR ALL THAT THE FATHER HAS IS YOURS!”

After your graduation into Godhood is finished you will be called to create first a world. And you will be the Elohim or the Gods over it. And you will people it with your own Spiritual offspring. And you, as their heavenly parents, will be solicitous of their every need and righteous desires as they will call upon you for help and understanding, for love will be yours in its fulness.

And thus, “God standeth in the congregation of the Mighty. He judgeth among the Gods!” And I, Jesus Christ, will be exalted also and advanced as you advance in the progressing spiral of eternal glory and divine achievement. For the Father has said, “This is my work and my glory, to bring to pass the immortality and the eternal life of man!” And so the Heavenly Father will be exalted to a higher degree of glory by each progressing generation of Gods evolving under Him.

Thus one advances into Godhood as he, too,

uses the Light and knowledge he has accumulated in his eons of schooling and progress, to rule

first over a world, then a solar system — a galaxy and finally a universe — and on and on — into infinitude.

Stand in your Glory Loved Ones!

Be the LOVE that God created you to BE! YOU ARE DIVINE!

If you want to read more of this amazing book you can get it on Amazon: